Strange Company`s Director, Hugh Hancock, died in 2018. Strange Company is no longer a registered Company. This site is part of his body of work, and as such it is hosted and maintained by a group of volunteers and as an archive of his work. A comprehensive list of the works being archived can be found here. If you have any problems with the site, please report them using this form.

I’ve not done a sous vide post for a while, as you may have noticed. Now, you might have thought that was because I’d abandoned this silly cooking things in plastic fad.

Let’s back up a bit. What’s sous vide? Well, we explain it in our first ever episode, in fact - basically, it’s cooking using a water bath whose temperature is very precisely controlled to ensure that the reactions - and only the reactions - that you want to happen in your food actually take place. You don’t want all the water to be squeezed out of your steak, so you cook at a temperature where that won’t happen. But you do want the bacteria to die and the meat to be tenderised by the proteins breaking down, so you cook it hot enough for that to happen.

There’s lots of science and practical stuff, and it’s all very fascinating, and I recommend Douglas “I’ve been interviewed on Khymos now” Baldwin’s superb guide to the topic if you want to know more.

Most professional cooks using sous-vide will use laboratory water baths, but they cost a lot of money, so home cooks tend to either use a big pot of water and a thermometer or an improvised/cheaper sous vide water bath made with temperature controllers or an Arduino and rice cookers. And that’s the way I’d been doing sous-vide, on and off, for a year or so. It’s a bit of a pain in the ass, though - you can cook that way, but the slow cooker I was using took about 3 hours to reach the right temperature, so I didn’t exactly use it daily.

However, in December, I finally got fed up. I wanted to use sous-vide more, and I wanted to cook stuff without worrying I’d hit the wrong temperature. So,(Puts Clarkson voice on) I found this on the Internet: 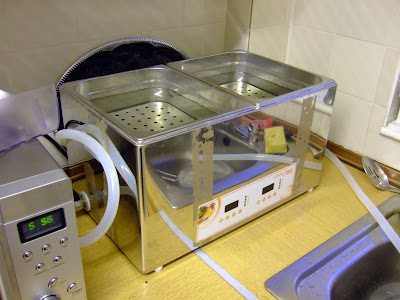 That’s a full-on commercial dual waterbath. It’s not cheap, for Â£1000-ish (post-haggling) orders of not cheap. But it has finally allowed me to incorporate sous-vide, more or less, into my daily routine.

Is it worth it? Is sous-vide actually usable enough day-to-day that it’s worth spending that much money? Well…

p(. I tested this out for the first time on Monday: I took a duck leg from my overfull freezer, vacuum-sealed it with salt and pepper, and stuck it in one half of my double bath for 15 hours at 83 degrees. Then, at 6pm the next day, I extracted it, dried it a bit, poured the juices into my sauce, and seared it for a minute on either side. And the result? Well… 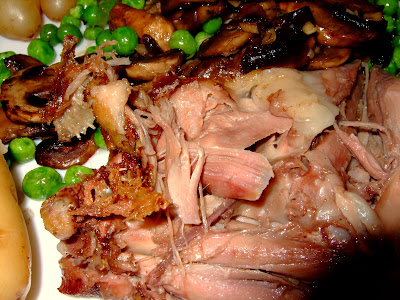 The sous vide duck leg was stunning. Probably one of the nicest things I’ve ever cooked. And all this for Â£1.50 ($2.25 ish) from Sainsburys. You can do similar things with sous vide pork belly (I get mine from the same farm that supplies Heston Blumenthal, for about Â£2 for a portion), oxtail, mutton (oh, my god, mutton. Incredible-tasting stuff. So good, in fact, that it deserves its own point), turkey leg (in theory - haven’t tried this yet), and dozens of other cheap-ass meats. I might well make my money back on the bath in a few years by buying duck legs rather than fillet steak. And added to that, these cuts tend to be incredibly flavourful, and quite unique.

p(. Unless, that is, you have a sous-vide machine. My evening meal will tend to involve me wandering into the kitchen to cook some pasta or potatoes, wandering off again for about 20 minutes, wandering back three minutes before I serve to steam some veg, searing my steak/chicken/pork/rhino for a minute in a pan, and presto: 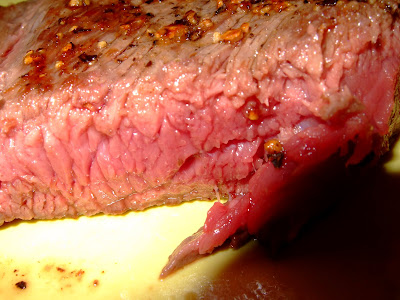 Nice, huh? And about five minutes’ work. You can even use sous-vide to cook meat for stir-fry or pasta, and ensure it’s perfectly done - the sous vide chicken linguine I did a while ago with 62-degree meat was amazing. If your potatoes take a bit longer to cook than you expected, that’s not a problem - anything cooked sous-vide can cheerfully be left cooking for another hour or so. You can even chill your food down to make your very own home-made ready meals, as Douglas Baldwin does, although I’ll admit I’ve not tried that yet because the idea of botulism even as a vanishing possibility gives me the Fear.

p(. I understand that sous-vide has pretty much revolutionised chicken in restaurants - previously often considered the blandest meat, sous-vide allows it to be cooked much closer to rare, preserving its juice and its flavour whilst still making it safe to eat. At home, a 62-degree chicken breast is an utterly stunning meal - healthy, packed with taste, with the lovely hay-like barnyard taste that only really good chicken can normally manage.

p(. And that’s not the only thing that sous-vide revolutionises. Salmon cooked so that it appears almost raw and tastes like smoked salmon, but with no smoke. Mutton - oh, my, mutton. Once again, almost uncookable outside a stew. But sous-vided at low temperature for ages, it becomes like Lamb+1 - it tastes like lamb, but richer, deeper, meatier, better in every way - oh, and cheaper, too. And the list goes on.

p(. It’s even good for the veggies in the audience. Parsnip, for example, is a stunning, rich, unctuous revelation cooked sous-vide. Carrot, too. Sous-vide carrot is what you always imagined normal carrot would taste like if it was nice.

p(. No undercooked chicken. No dry beef. No soggy potatoes. It’ll be as perfect as if it was being served at the French Laundry (barring seasoning and meat quality) - because you’re using the same science.

Yep, I’m liking the sous-vide. I don’t use it every day - sometimes I’ll just fry a steak or make a noodle soup with enough chillis in it to set fire to Paraguy. And I’m still learning the tricks - more on that next week, when I’m going to be doling out some sous-vide tips. But in terms of providing new cooking options, saving me money, and giving me top-quality food whenever I want it, I love my crazy-ass uber-expensive cooker.

We’re starting a newsletter for people who are interested in sous-vide: news, tips, places to get cheap equipment, that sort of thing.